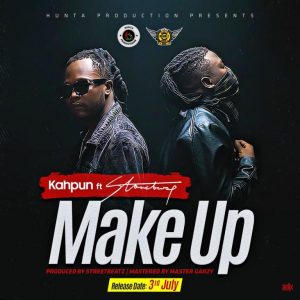 Have you been waiting on the actual date for the official release of Kahpun’s ‘Make Up’ song which features the Burniton Music Group CEO Stonebwoy?

If so then the wait is over. The song Make Up from the camp of Higher Heightz Army C.E.O is scheduled to be released on Friday, 3rd July 2020.

See Also: Stonebwoy Endorses Kahpun, Claims He Is The Next Big Thing

The song will be released with its video on the same day. That’s a double-take home for the loyal fans and those who intend to have a feel of what listening to Kahpun’s song sounds like.

The song features most creative and talented Reggae Dancehall art Stonebwoy, produced by the Almighty StreetBeatz, mastered by the king Of Mastering, Master Garzy and recorded under Hunta Production.

Get to know the song on the release can be streamed across various digital platforms including but just to mention a few; Spotify, Amazon Music, Deezer, iTunes among others. The visuals of course can be streamed on YouTube. Don’t forget to like and subscribe to the channel. Subscribe