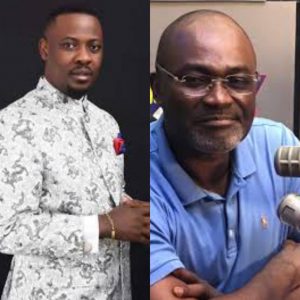 After several weeks of making life unbearable for Prophet Nigel Gaisie, Member of Parliament for Assin Central, Kennedy Agyapong, has revealed when he will stop pestering the man of God.

According to Mr Agyapong, his incessant accusations against Prophet Gaisie will end when he has in his possession, enough incriminating information about him.
“If I’m able to come by some serious information about Nigel, then I will stop bothering him. That was the same thing I did with Obinim, after getting enough information about him, I halted my crusade against him and started this one. So it depends,” he told Accra-based Metro TV, monitored by gh360songs.com
The controversial lawmaker, who has taken it upon himself to expose some men of God he claims are ‘fake pastors‘ in the country, is yet to make some damming revelations about the Founder of the Prophetic Hill Chapel.

Speaking on his Accra-based Net 2 TV, the maverick politician made some wild allegations about the man of God, saying he uses ‘Juju’ which he obtained from The Gambia to operate his church.