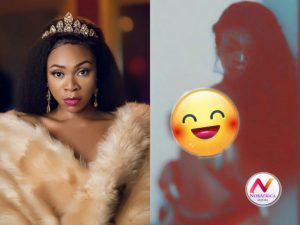 Shatta Wale’s baby mama, Shatta Michy, has just caused a stir on social media as she drops her nekked photo, just for the gram perhaps.

Read Also:VIDEO: Ghanaian l£sbians organize a lavish secret s£x party in Accra
Per a photo sighted by shataghana.net, Shatta Michy is seen flaunting what best her mama gave her.
The detail of the photo – Michy was spotted wearing a black panty. Her beautiful assets were visible.

The photo has laid up a lot of attention back to the young lady with many asserting that she wants to capture Shatta Wale’s attention to what he is missing.