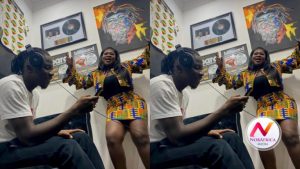 Ghanaian singer, Sista Afia, appears to be featuring all the big guys in the game from Shatta Wale to Sarkodie to Medikal and now she is about to release a track which will have Stonebwoy on.
Photos flying across social media show Sista Afia in the studios of the BHIM Nation President as they work out some good music.

Sista Afia has redeveloped into one of the prime musicians in the country based on her versatility, great voice and the niche of her songs which capture the attention of many youths.
Confirming the news, Susta Afia shared a video of herself and Stonebwoy happily in the studio vibing to the release of the track which will be a banger.

Sista Afia was in the news recently when she decided to battle it out with two top Ghanaian female rappers: Eno Barony and Freda Rhymes on a musical beef which showcased her ability to rap although many still doubt the originality of her lines. 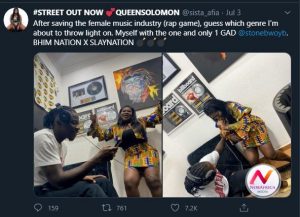