Why Patapaa must be banned from doing music – Article Wan (WATCH) - www.gh360songs.com 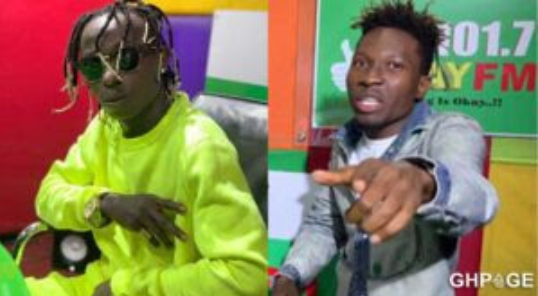 The “Solo” hitmaker went hard at Patapaa in an interview with Nkonkonsa following the latter’s diss song titled “My Dog Food”.

Patapaa recently released the song where he accused Article Wan of eating his dog food.

Aside from the diss song, Patapaa has also been branding himself as the ”saviour” of Article Wan’s music career, stating in various interviews that the afro-dancehall artiste career was drowning till he met him (Patapaa) and they did a collaboration.

Their song ”That Thing”, according to Patapaa, revived Article Wan’s music career.

Reacting to this, Article Wan has released ballistic missiles on Patapaa describing him as a ”dog”, adding that he is not even of Ghanaian nationality.

He also called on the authorities in Ghana’s music industry to ban Patapaa from doing music, stressing his style of music is a disgrace to the entertainment fraternity.

”Patapaa and I, who resembles a dog?” he questioned, further stressing the ”government must seize Patapaa’s music licence. He is ruining the business. He is not even Ghanaian. He looks like someone from Somalia”.