Kennedy Agyapong In Trouble As Ibrah One Releases A ᏉᎥᎴᏋᎧ Of A Lady They Both F͎v͎c͎k͎ Together - Gh360songs.com 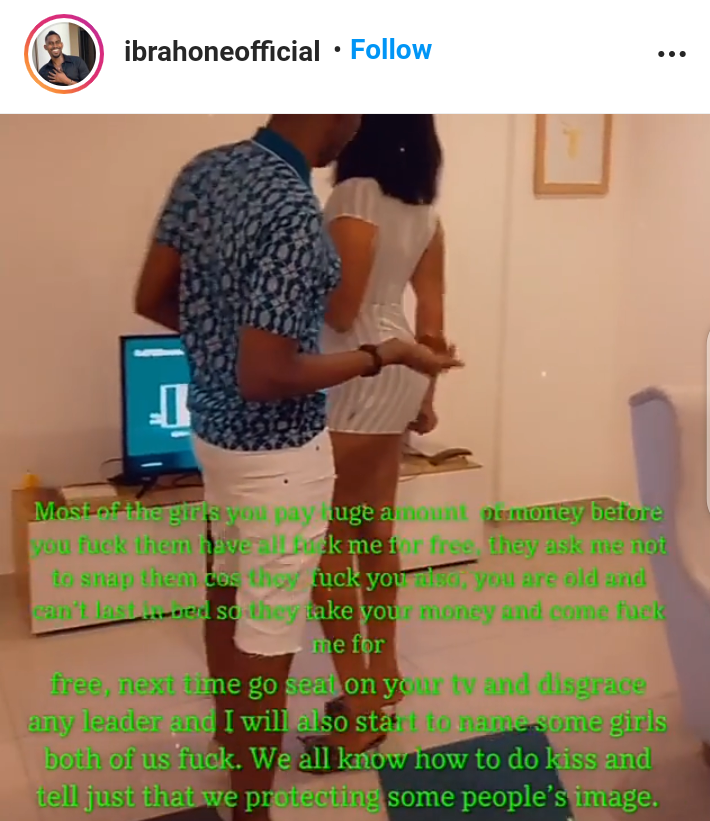 Ibrah One has again come out with another allegation against his topmost rival, Hon. Kennedy Agyapong, as he shares a video of a lady he claims they all have made out with her.

Ibrah One on his social media pages uploaded a video of a young lady whose face didn’t show and alleged that she is one of the ladies Hon. Kennedy Agyapong paid to sleep with her but he had already slept with her without paying a penny.

Although Ibrah One refused to mention Kennedy Agyapong’s name in his post, however, Ghanaian are already aware it’s the member of parliament for Assin Central he’s referring to.

Ibrah One called Kennedy Agyapong an old man with no strength to satisfy women who always sit on his television to talk trash about people.

Most of the girls you pay huge amount of money before you fvck them have all fvck me for free, they ask me not to snap them cos they fvck you also, you are old and cant last in bed so they take your money and come fvck me for free, next time go seat on your tv and disgrace any leader and I will also start to name some girls both of us fvck. We all know how to do kiss and tell just that we protecting some people’s images