Video: Bride In Tears As Estranged Woman Storms Wedding Ceremony Claiming To Be Pregnant With The Groom - Gh360songs.com 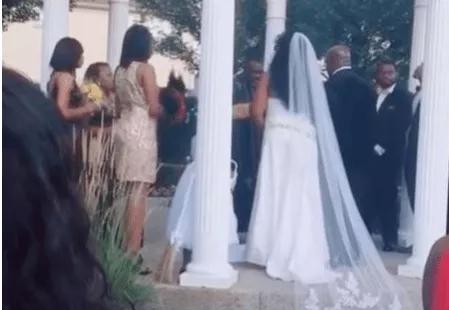 Video: Bride In Tears As Estranged Woman Storms Wedding Ceremony Claiming To Be Pregnant With The Groom

Video: Bride In Tears As Estranged Woman Storms Wedding Ceremony Claiming To Be Pregnant With The Groom

A woman crashed a wedding ceremony and shocked guests as she claimed to be carrying the groom’s child.
Footage of the incident has gone viral on social media though it’s not clear when it was recorded.

The pregnant woman turned up at the outdoor wedding while the officiating Minister was reading the vows to the couple at the dome-shaped patio.

Sharing her story, she said they didn’t divorce, and there was no issue between them, so she doesn’t know why he should be getting married to another lady, while she already has children for him.

While the bride watched the scene in tears, the aggrieved woman was heard beckoning on her other kids to come into the wedding hall.