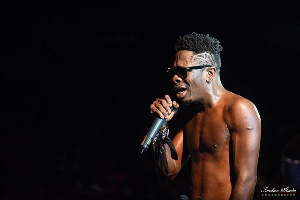 The studio of Hitz FM came to a standstill after a die-hard fan of Shatta Wale who has been looking for him for quite too long finally got to meet the African giant.

It was love at first sight when the man, identified as a commercial driver met the dancehall artiste on Friday, October 30, 2020.

According to reports, the trotro driver who heard the news on the radio that Shatta was on the premises of Hitz FM in Kokomlemle stopped his vehicle in the middle of the road, ordered his bus conductor to refund monies to passengers, and rushed to the studio with the hope of meeting Shatta Wale.

What captured the attention of many was the huge image of Shatta Wale tattoed on his back.

The host of the show, Andy Dosty paused the interview for the driver to officially have a word with Shatta.

Kneeling before him, he cried out saying: “I don’t want money… my God, oh Lord! I’ve looked for you for years. I beg you, it’s not because of your money. I’ve seen my star, I am done. Thanks for making me meet him.”

When Shatta Wale asked for his contact details, he said he was just okay meeting him: “I don’t have a number, I’m okay, just go.”

The Dancehall artiste who was taken by surprise could not hide his tears when he was asked by the host, Andy Dosty what the driver’s actions meant to him.

He answered saying: “You know me when I cry my face is not nice. In life, I just don’t know… this is why I want to show everybody love because it’s nice to love. When I see people like this doing this to me, sometimes I ask myself, who at all is Shatta Wale. I keep asking myself questions… I just want to help because people like this you should imagine where they’re from and see if he’s okay. See his tattoo on his back. That’s why I pray for God to bless us so we also bless some people. I don’t want to cry plenty, don’t clean my make-up.”

According to Dancehall artiste, he never imagined that his music would fetch him such a huge fan base. To him, the dream was just to do music for the public.

“Right from childhood, I just wanted to motivate and educate people and just teach them about God through music by making it fan. I didn’t have an idea of who a celebrity or star was. I was just doing music for people to dance, be happy, and learn something about life. I’ve been complaining to my team that I’m overwhelmed by the fan-love,” he revealed.