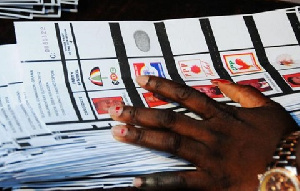 Ahead of the 2020 General Election, the Electoral Commission is still engaging Ghanaian voters to ensure a smooth and peaceful election.

One concern over the years is the high number of rejected or spoilt ballots that end up in the ballot boxes.

Much have been said about some voters voting for more than one candidate on the same ballot paper and others also mistakenly sprinkling the ink near other candidates in a way that makes it difficult to clearly determine who the voter intended to vote for.

As a measure to curb the incidence of many spoilt ballot papers being discovered during counting and effectively disenfranchising those whose ballots papers were spoilt, the EC is intensifying education on the opportunity of replacing your ballot paper.

Speaking at a forum to discuss “Electoral Offences: The Unspoken Threat To Peaceful Election”, the Director of Electoral Services, Dr Serebour Quaicoe said voters who have ruined their ballot papers can request for a replacement from the Presiding Officer at their polling station.

You have to return the spoilt ballot to the Presiding Officer to replace it for you, you don’t have to destroy it yourself,” he said.

According to him, the Presiding Officer will draw two lines on the returned ballot paper and write spoilt across it.

The voter will then be given a new ballot paper to cast their vote.

In this case, if you make a mistake by voting on the wrong candidate, you don’t have to spoil your ballot paper but you can still get the opportunity to cast your vote.

Just remember to return the ballot paper with the mistake on it to the Presiding Officer for a new ballot paper.