Diego Maradona has died at the age of 60. 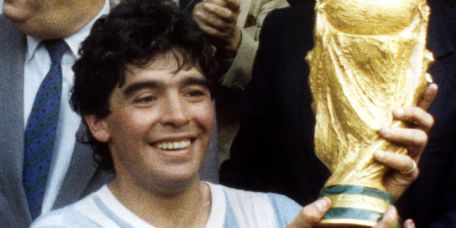 Diego Maradona has died at the age of 60.

The greatest footballer of his generation suffered a cardiac arrest at a home in Tigre, Argentina.

Maradona had been recuperating from the removal of a blood clot on the brain.

Born in the Villa Fiorito area on the outskirts of Buenos Aires, Maradona made his professional football debut while still aged 15 with Argentinos Juniors in 1976.

A prodigious talent from the off, he scored 115 goals in 167 appearances for Juniors before a move to Boca Juniors in 1981.

He would spend just over a year at the Bombanera, but it was one that cemented his status as one of the greatest talents the world had ever seen.

Despite a disappointing showing at his first World Cup in 1982, that ended with his sending off against Brazil, he made a record-breaking move to Barcelona.

But despite a bright start, Maradona failed to properly settle in Spain. A combination of illness, a broken ankle courtesy of Andoni Goikoetxea and off-field problems led to him fleeing for Napoli in the summer of 1984.

Viewed as a surprising move at the time, it would prove a masterstroke.

Maradona settled into Naples like a native, and helped raise an ordinary Serie A side to the status of champions in the 1986-87 season.

That, of course, followed his display at the Mexico World Cup.

Maradona captained Argentina to their second world title, scoring incredible and infamous goals along the way against England and Belgium.

He was star of the show and creator supreme in the final, when they beat West Germany 3-2 in the baking sun of the Azteca.

While securing his place as the world’s best footballer at Napoli, Maradona was also sowing the seeds of his own downfall.

Cocaine was his drug of choice, and he became involved with the Neapolitan underworld.

He’d help the Biancocelesti win the UEFA Cup in 1989 and another Serie A title in 1990, but the peak of his career had been unknowingly been crested.

Maradona again led Argentina to a World Cup final in 1990, but neither the team nor their star player were the same as four years prior.

An arrogance and petulance was pervading, and came to a head with Maradona cursing the local fans before their semi-final against Italy in Naples.

They’d lose an ill-tempered final 1-0 to West Germany and an Andy Brehme penalty.

Maradona received a 15-month ban from football after testing positive for cocaine in 1991. Another ban followed in ’94 after he tested positive for performance enhancing drugs at the 1994 World Cup.

These punctuated a staccato career, which seemed to have more starts than stops. Despite brief flashes of brilliance at Sevilla, Newells Old Boys and a second spell at Boca