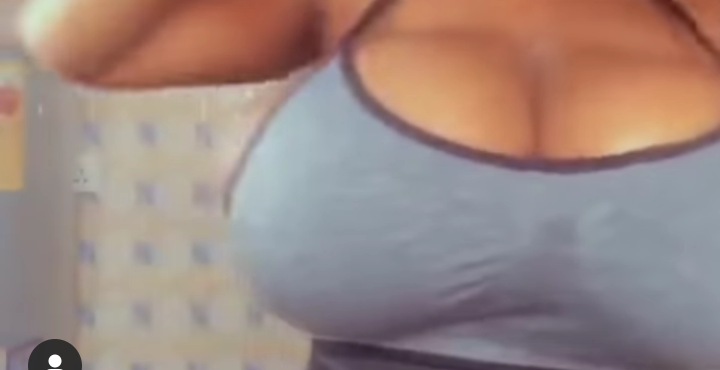 Millicent Paticia Amoah has shown that she has the biggest breasts in the country overtaking Pamela Odame as she dances in style, flaunting her heavy melons and totally disconcerting some social media users.

Her action is highly influenced by Okyeame Kwame’s infectious ‘Yeeko Challenge’ instigated by the rapper in his quest to promote his latest record.

Stationed in a room with a pony hairstyle and a light lipstick to compliment her looks, an overly excited Millicent clad in gym wear that could barely cover her goodies is seen performing Okyeame Kwame’s ‘Yeeko’ which features ‘rockstar’ Kuami Eugene.

The video that captures the jaw-dropping display has since its release been trending, eliciting interesting reactions from a section of the public. What appears to fascinate some social media users the most is how Millicent effortlessly and flawlessly moves to the rhythm despite how loaded her chest is.

Okyeame Kwame having been notified about the video could not help but post it on his Instagram page with a humorous caption.

“Abeg tag her wai. My keypad no dey work,” he wrote, with “suffocation awaits he who will venture” featuring in the comment section as typed by a follower.

‘Yeeko’ is an inspiration piece that highlights the burning desire to achieve greatness and enjoy life to the fullest despite the challenges that may exist.

With production credit going to Kuami Eugene who is also featured on the song, ‘Yeeko’ taps into the new wave of drill music being spearheaded by some artistes in Kumasi where Okyeane Kwame hails from.

The record was released in January this year and has garnered a remarkable audience appeal.

Check out Millicent’s video and some comments below